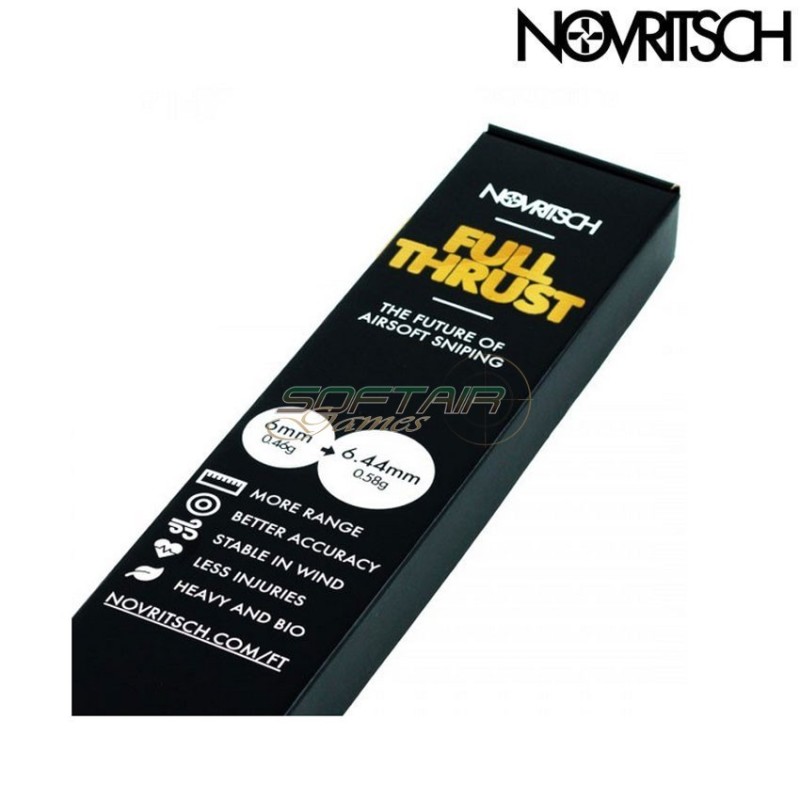 With the NOVRITSCH FULL THRUST KIT installed in your VSR G-SPEC / VSR G-SPEC clone you can use 6.44mm 0.58g Bio BBs.

The bigger diameter and the heavier weight results in more range, better accuracy, and stability in wind.

You will get all these advantages while causing less injuries due to the bigger impact surface.
The 0.58g BBs are biodegradable which makes them ideal for outdoor games.

The installation is easy, follow the included video installation guide, and your rifle will be ready in a matter of minutes.

Since I started airsoft sniping 11 years ago, I had one mission. Crafting the perfect sniper rifle, with the best possible range and accuracy. Since 2016 however airsoft sniper development hit a dead end. The 6mm 0.46g BB was the heaviest Bio BB and it could not be made heavier. The ammunition was the actual factor which limited the full potential of our sniper rifles.
It is time for change

I went back to the drawing board and engineered the system from ground up. After extensive research, I found out that the 6mm BB is not ideal for 2-4 joules sniper rifles. I needed to do what hasn't been done before, creating the future of Airsoft Sniping.

Air resistance increases exponentially with the projectile's speed. The heavier 0.58g BB leaves your muzzle with the same energy, but slower, which leads to less air resistance. This is why it keeps speed and the kinetic energy much longer which leads to a drastic increase in effective range.
Consistent Magnus Effect

The higher mass of the 0.58g BBs in combination with the bigger diameter makes for a long-lasting backspin. Since the mass is further away from the center than on a 6mm BB, the spin can be kept for longer which leads to a flat and long-ranging hopup effect.

light characteristics | 0.46g compared to 0.58g
The flight path explained
The image shows the range advantage of the 0.58g compared to the 0.46g BBs. Both BBs are fired at the same energy. The 0.58 flies flatter and further.

As a result of the larger 6.44 diameter, vertical accuracy is improved due to a more consistent force of the Magnus effect (=hop up effect). The hop up bucking has more time and surface to grab the BB and spin it consistently every time you fire a shot.
Inertia Advantage

Due to the high inertia, the 0.58g FULL THRUST BB will keep its direction towards the target more stable even with air turbulence trying to get it off its path.

Test Setup
The test was performed in a closed environment which was a 100-meter long indoor shooting tunnel. Both the 6mm and the FULL THRUST rifle were fired at 2.6 joules from a bipod. The results show a tighter grouping of the 0.58g than of the 0.46g.

Stable in Wind
Wind Drift Advantage
The heavier a moving object is, the harder it is to get it off its direction of travel. The 27% weight increase of the FULL THRUST BBs makes for 27% more inertia.

This means that the 0.58g BBs are much less affected by the wind which enables you to hit your targets consistently at windy outdoor games.

The flight path explained
The graph shows you the difference between the 0.58g and the 0.46g when influenced by the wind. In the beginning, they are very close together, but the further the BBs fly the more you can see the stability of the 0.58g BB compared to the 0.46g. The 0.58g holds the direction better.

The higher surface of the 6.44mm diameter spreads the force of the hitting BB over a bigger area. This results in less injuries. An example that shows this effect well is the bigger diameter of paintballs.

They are fired at an energy of up to 10 joules, but since the paintballs are bigger, it doesn't break the skin. A 10 joule 6mm airsoft gun would be way too dangerous to bring to the field. This is why the 6.44 BB is overall safer than the 6mm BB.

To visualize the safety aspect of the FULL THRUST BBs we used ballistic clay diluted with water. Both the 6mm and the 6.44 rifles shot with similar energy.

As you can see, the FULL THRUST BB could not enter the clay as deep as the 6mm BB could, due to the bigger surface area.
Skin Irritation Test

To test the theory we shot with a 6mm and a FULL THRUST rifle at bare skin. Both rifles had 1 joule and were fired from 10 meters at a forearm.

While both hits are far away from a serious injury the close-up picture shows how the 6mm BB damaged the skin slightly more due to the smaller impact surface.

The base material from the NOVRITSCH 0.46g Bio BB is the same as for the new FULL THRUST BBs. The heavier weight is a result of the increased diameter.

This makes the FULL THRUST BB the heaviest biodegradable BB on the market which makes it ideal for long-range engagements at outdoor games.